Cell Tracking may be performed in vivo provided the label is sensitive to the technique used for imaging. Fe particles in stem cells may be tracked using ultrashort echo time experiments which allow the very short T2 to be seen. 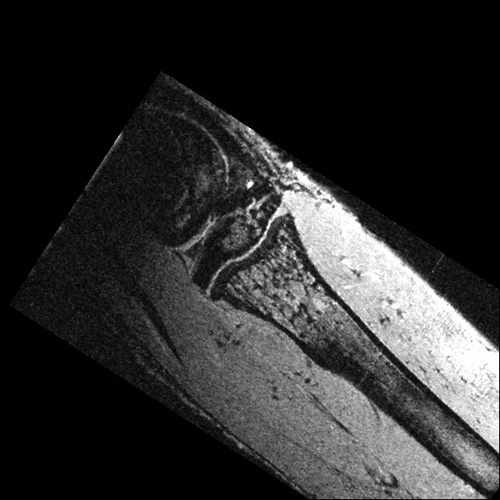 This is an in vivo image of a mouse leg bone. The black dots are stem cells which have been tagged with iron particles which allows them to be easily tracked by standard imaging techniques.

This following instruments can be used with this technique:

Functional magnetic resonance imaging, or fMRI, makes it possible for us to non-invasively measure signatures of localized brain activity in variety of animal species, including humans. Its relatively good spatial and temporal resolution has opened a window to the mind like no other technique in scientific history. The most popular functional imaging technique relies on the blood oxygen level dependent (BOLD) contrast mechanism first reported by Ogawa and colleagues in the late 80’s and early 90’s. A variant of T2 relaxation, known as T2* (“T-2-star”), is produced by inhomogeneities or imperfections in the main magnetic field generated by the MRI scanner. This inhomogenous environment causes reductions faster transverse relaxation that then becomes sensitive to the oxygenation state of the brain tissue. Deoxyhemoglobin in plasma red blood cells is paramagnetic while oxyhemoglobin is diamagnetic. The intravascular difference between the two provides for an endogenous contrast mechanism. Early in the 90’s Ogawa and co-workers provided evidence that a decreased T2* signal in blood vessels, particularly veins of the rat cortex, is due to blood oxygenation state. Darker veins in the cortex were distinguishable in rats inhaling low oxygen concentrations in inspired air while increased oxygen saturation (significantly less deoxyhemoglobin concentration in blood veins and venules) increased the brightness of the MR images. Thus, this T2* contrast mechanism was shown to be dependent on blood oxygenation. Publications providing support for task-dependent changes in the BOLD signal followed and the application of fMRI emerged in the many fields of neuroscience. The use of 4.7 T and 11.1 T horizontal bore systems for rodent and other small animal applications are optimal both because of the high signal-to-noise ratio and excellent T2* contrast for functional studies. An advantage of having higher resolution images obtained in higher field systems (11.1 T to 17.6 T, and above) is that they can create voxels that better localize activity in the brain without significant losses in signal to noise. Our laboratory employs fMRI techniques in a variety of applications to gain an understanding of how the brain works and following the progression of specific neuropsychiatric like and neurodegenerative diseases.

Localized spectroscopy techniques such as STEAM, PRESS, ISIS and CSI may be used to provide spectra of 1H, 13C and 31P both in excised tissue and in vivo.

What's happening at the MagLab tody?

Explore our magnet schedule to see what exciting research is happening on our stellar fleet of instruments right now.

Find the Perfect Magnet
for your Research

Search our magnets by field strength, bore size, and even technique.