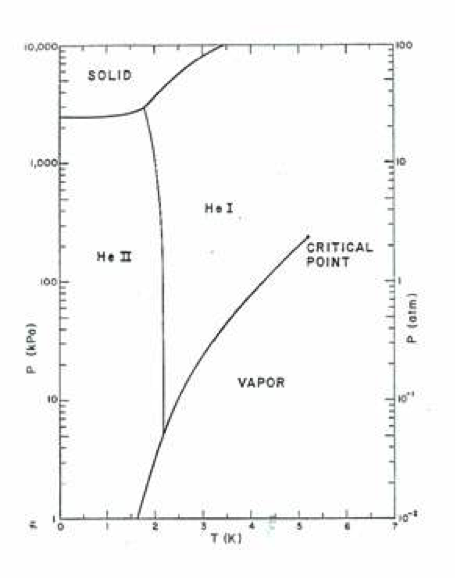 Fig 1. Phase diagram of liquid helium. Note the following unique features. Two liquid phases (He I and He II), He II is in equilibrium state at very low temperature, Solid state only exists at low temperatures and pressures above 2.5 MPa.

Liquid helium is an exceptional fluid that can exist in either of two phases, normal helium (He I) or superfluid helium (He II). These two phases are separated by the so-called lambda phase transition, which under saturation conditions is at about 2.2 K.

While He I is essentially a Navier-Stokes fluid obeying classical thermal fluid dynamic equations, He II displays many unique transport properties, such as a superior thermal conductivity that is many orders of magnitude greater than that of ordinary fluids. It also has the lowest kinematic viscosity of all known fluids being about three orders of magnitude smaller than that of air. These unique transport properties are the reasons why He II is used today in a variety of technical applications from the cooling of superconducting magnets to space-based infrared telescopes.

The transport properties of He II are described by the two-fluid model in which the He II is comprised of two interpenetrating fluid components. The normal fluid component behaves like an ordinary Navier-Stokes fluid while the superfluid component has no viscosity or entropy. This model leads to a unique heat transport mechanism known as thermal counterflow (see Fig. 2). With a heat flux applied to He II, the entropy containing normal fluid component carries the heat away from the source. At the same time, the superfluid component moves in the opposite direction in order to conserve mass. This very efficient heat transport process combined with the essentially constant density of He II ensures that under most circumstances a He II bath will be isothermal with negligible ordinary bulk convection. Thus, a bath of He II boiling under saturated conditions appears quiescent with evaporation only occurring at the free surface.

Fig 2. Schematic of He II thermal counterflow channel. The normal fluid carries the entropy away from the heat source and the superfluid flows in the opposite (counter) direction to conserve mass and momentum.

Stable hydrogen is in the form of a diatomic molecule. The most common form is H2, although there are two other isotopes of hydrogen; these are deuterium and tritium, which is radioactive. Liquid hydrogen is used extensively as a fuel in rocketry and more recently in commercial transportation.

H2 has two different nuclear spin states: ortho-hydrogen (spin 1 state) and para-hydrogen (spin 0 state). Near room temperature, equilibrium hydrogen is 75% ortho and 25% para. However, at low temperatures, around the normal boiling point of 20.3 K, hydrogen is nearly all in the para-hydrogen state. The conversion process from ortho to para hydrogen is exothermic and generates about 700 kJ/kg. It is also quite slow unless a catalyst in employed to facilitate the conversion process. Thus, for long term storage of LH2, the ortho-para conversion is usually carried out as the LH2 is produced at a centralized plant.

The critical point for H2 is Tc = 33 K at pc = 1.3 MPa, making it one of the coldest liquids known. It also has a very low density r = 70.8 kg/m3 at the NBP. The triple point where hydrogen begins to solidify under saturated vapor pressure is TTP = 13.8 K. The latent heat of LH2 is hfg = 445 kJ/kg at the NBP. The transport properties of LH2 are quite similar to those of other fluids with the exception of the extremely low temperature and density. Heat transfer and pressure drop in forced flow LH2 generally correlates with classical treatments.

While using LH2, it is important to use proper safety techniques. Hydrogen is extremely flammable as with a small ignition energy it will combine with the oxygen is air with a strong exothermic reaction.

Oxygen forms a diatomic molecule that represents 21% of the earth’s atmosphere. Liquid oxygen, which is produced in air separation process, has a normal boiling point of 90.2 K and is used as a rocket fuel and in any process requiring oxidation. Oxygen for medical purposed is often stored as a liquid.

Liquid oxygen is unique because it has a pale blue color and is paramagnetic. LO2 will stick to the poles of a magnet as can be seen in this lab demonstration.

The transport properties of LO2 are quite similar to those of other fluids. Heat transfer and pressure drop in forced flow LO2generally correlates with classical treatments.

While using LO2, it is important to use proper safety techniques. LO2 will allow combustion of many materials that will not burn under normal atmospheric conditions. 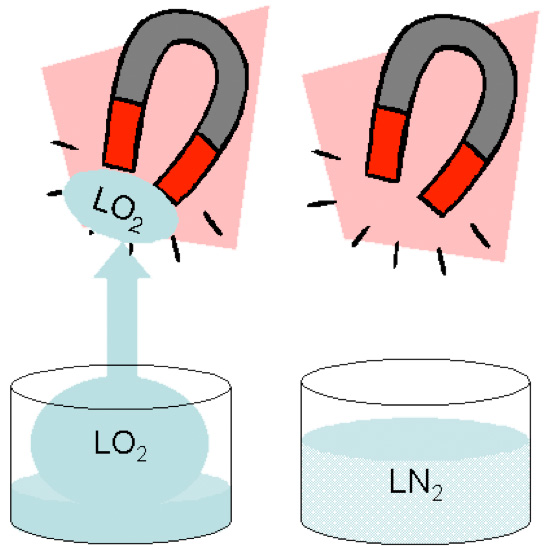 The reason that it is paramagnetic is because the oxygen molecule has two unpaired electrons. Electrons not only go around the atom in their orbitals, they also spin, which creates a magnetic field. Unpaired electrons spin in the same direction as each other, which increases the magnetic field effect.

Two videos that illustrate something about liquid nitrogen.