The history of people and magnets goes back more than 2,000 years, marked by milestones such as the invention of the compass, the discovery of electromagnetism, and the invention of magnetic resonance imaging (MRI). One of its recent chapters began in 1990 with the founding of the National High Magnetic Field Laboratory.

Though most of its pages have yet to be written, this story has already claimed a place in the annals of science.

The tale begins in the late 1980s, when a small group of leaders from different corners of the country crafted a vision for a premier research facility that would build and operate the world's most powerful magnets. Jack Crow of Florida State University in Tallahassee, Don Parkin of Los Alamos National Laboratory in New Mexico and Neil Sullivan of the University of Florida in Gainesville collaborated on the proposal for this new entity, to be operated collaboratively by the three institutions and headquartered near FSU. They secured the backing of key Florida officials and submitted their proposal to the National Science Foundation in 1989. In so doing, the team challenged the Massachusetts Institute of Technology, home to the Francis Bitter National Magnet Laboratory, founded a quarter of a century earlier.

Their bold plan articulated a novel vision for a magnet laboratory that would: 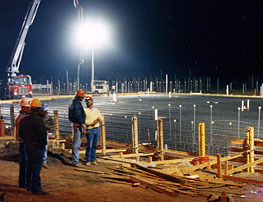 A meter-thick concrete floor is poured for the Continuous (DC) Field Facility.

The proposal proved persuasive. Following a stringent peer-review competition, the National High Magnetic Field Laboratory was awarded to FSU in August 1990. With its first major hurdle cleared, the team moved quickly to the next: turning their promises into bricks, mortar and magnets.

A large, never-occupied office complex 2 miles south of FSU's main campus was the starting point. Construction workers modified the building for the lab's unique requirements, adding two new wings at either end to house the world-record research tools planned for the site. The Mag Lab pioneers broke new ground in more ways than one as they overcome the intellectual, technical and logistical challenges of creating these magnets and the facility to house them. Among other issues, they needed to factor into their designs ways to protect sensitive tools from vibration and interference from outside magnetic fields. They also needed to build a utility infrastructure that would meet the magnets' tremendous appetite for power and chilled water. One memorable event was the casting of a meter-thick concrete floor for the Continuous (DC) Field Facility. The pouring went on, uninterrupted, for several days and nights.

As it turned out, construction was completed on time and under budget. Then, in June 1994, the lab passed with flying colors its first major technical test: the successful operation of a 27 tesla magnet, a new world record. When a host of national, state and local dignitaries convened in Tallahassee the following October to dedicate the facility, then-Vice President Al Gore predicted it would break new ground in medical science, materials and energy efficiency. "It will be a mecca,"; he told a crowd of more than 1,000 people, "for scientists and engineers at the frontier of these important sciences."

While bulldozers and jackhammers still echoed through the building, Crow, named the lab's first director, was busy finding people to fill it. He recruited some of the finest minds in science to join the Magnet Lab faculty, and some of the most talented technicians to design, build and service the magnets and other tools those scientists would need. Today, the Lab's magnet engineering and design team is considered the best in the world, providing state-of-the-art equipment not just to the Mag Lab, but also to industry and other research facilities across the globe. The lab's renowned faculty has included Nobel Prize laureates, National Academy of Sciences members and other scientists and engineers working at the top of their fields. 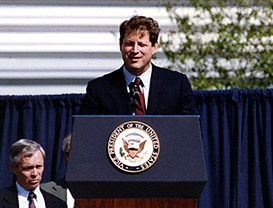 A meter-thick concrete floor is poured for the Continuous (DC) Field Facility.

Over the years, the lab has continued to break record after record for resistive magnets (27 tesla, 30 tesla, 33 tesla, 35 tesla, 36.2 tesla), hybrid magnets (45 tesla) and pulsed magnets (60 tesla long-pulse; 77.8 tesla, 10 millimeter bore short-pulse; 90 tesla multi-shot). All the while, faculty and visiting scientists have used the powers of those magnets to make important contributions to magnetic resonance, superconductivity, semiconductor and other areas of research. Under the leadership of Crow and current Director Greg Boebinger, who took the helm in 2004, the lab has established itself as a world-class facility. Today, the Magnet Lab attracts more than 1100 visiting scientists from across the globe every year. The NSF and the state of Florida have rewarded the lab's efforts with renewed, generous funding.

Excellence breeds excellence, The lab's outstanding senior faculty and scientific staff attract promising, highly regarded young faculty members, whose multidisciplinary experiences and approaches open new avenues for industrial collaborations. The lab established a successful educational outreach program that reaches thousands of Florida school children every year and offers teachers and undergraduates from across the country in-depth research opportunities and professional development. The program's goal is to nurture the next generation of scientists, educators and engineers, some of whom may one day return to the Mag Lab to make their own mark on science history.