Lithium has a lot going for it as a battery ingredient: It's the lightest metal and has great electrochemical potential and energy density. But it has problems, too, including a spotty safety record. 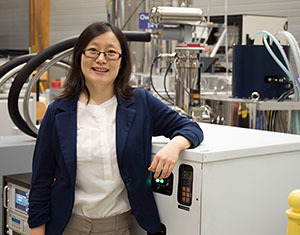 Hu earned her Ph.D. by solving one of the big bone mysteries. Using nuclear magnetic resonance (NMR), she discovered that citrate molecules at the interface of those two ingredients direct the formation of the composite bone matrix.

Since then, Hu has gone from bones to batteries. In particular, she studies the interfaces between electrodes and the electrolyte of lithium ion batteries.

Like all batteries, lithium ion batteries have an anode and a cathode; lithium ions travel through the electrolyte between these two electrodes to generate energy.

But even with just three main ingredients, problems pop up when you put them together. Materials accumulate on the electrodes’ surface, for example, lowering the battery's capacity. And if the accretions of those metallic dendritic structures eventually reach the opposite electrode, they create a bridge that shorts the battery and causes it to overheat.

Although most lithium batteries today use liquid electrolytes, scientists such as Hu are looking for a solid that could be safer (blocking the formation of those electronically conductive bridges) and yield more capacity. So they ask: What solid electrolytes will hold up at the interface with the electrodes? How do charges travel from one side to the other?

Hu and her group experimented with a composite electrolyte — lanthanum lithium zirconium oxide-polyethylene oxide (LLZO-PEO) — that leverages useful properties of both ceramics and polymers. They wanted to know exactly how lithium ions would travel through LLZO-PEO: Through the ceramic? Through the polymer? Through the interface?

It was a straightforward question — with a well-hidden answer.

"It's difficult to study the interface because it's buried," Hu explained. "The ceramic and the polymer are mixed together. There's no way you can separate them and look at the interface. If you pull them apart, it's not an interface anymore."

High-field NMR allowed Hu and her team a way to see those ions in action at the atomic level. They built small lithium-ion button cells and, with special equipment, observed where the lithium ions traveled while the cells charged and discharged inside a magnetic field.

To do this, her team devised a trick: Use one isotope (or variation) of lithium in the electrolyte (in this case, lithium-7), and another isotope (lithium-6) in the electrodes. This allowed Hu to identify the ions’ pathway: The lithium-7 ions swapped out for lithium-6 ions wherever they traveled.

That path, as it turned out, went through the ceramic. Knowledge like this can help engineers manipulate interfaces to design safer, more powerful battery materials.

This story was originally part of a series of stories about Science on the Edge. To read the other stories in the series, see Bursting the Oil Water Bubble, Surprise Under the Surface and Border Patrol.