How can the barrier between oil and water in emulsions be broken down? When things overlap, you often get more than the sum of those parts. Or as one chemist put it, A plus B isn’t necessarily AB: It's probably something a lot more interesting.

When two strong personalities clash, they're likened to oil and water. But the two fluids can indeed mix, with droplets of H2O distributed throughout the oil in an emulsion.

For crude oil companies, that can spell trouble. 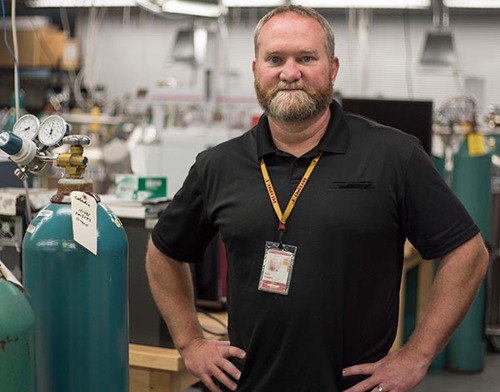 Whether companies extract oil from deep underground or from the surface, water inevitably ends up in the mix. While some naturally separates out, some can remain trapped in the oil as emulsified droplets, causing costly problems when the oil is processed.

Oil companies wanted to burst those pesky water bubbles and figure out what their walls were made of.

"If you knew their chemistry, then you could target them like a drug targets a virus, to knock them out," said Ryan Rodgers, an expert in petroleum science at the National High Magnetic Field Laboratory who directs the Future Fuels Institute (FFI) based there. "Then you could free the water, then free the oil."

But before you can determine what's in that wall, you have to isolate it. Rodgers and his team at FFI and the MagLab's Ion Cyclotron Resonance (ICR) Facility came up with an ingenious way to do just that.

They faced a sizeable challenge: Crude oil is the most chemically complex substance on Earth — a single sample can contain millions of different kinds of molecules. Some of these molecules are hydrophilic — so they are drawn to any water that gets mixed in the oil. As a result, they fuse into walls around areas of water, forming water droplets. The scientists needed to somehow identify, capture and remove those hydrophilic molecules.

So they created a clever trap for them designed around a simple grain of sand. They applied layer after layer of water onto silica until they figured out the exact amount needed to attract the problem molecules. (After a lot of trial and error, they discovered that 26 layers generally did the trick.) When the water-encased silica was added to the oil, the hydrophilic molecules in the droplet walls headed straight for them. This isolated the molecules that cause an emulsion.

The silica (encased first by its shell of water, then by a layer of water-loving crude oil molecules) was easily separated out. Scientists then simply peeled the target molecules right off and analyzed them. Using ICR instruments that rely on powerful magnets, the chemists were able to precisely identify the molecules that were acting as surfactants, molecules that lower the surface tension between petroleum and water and allow emulsion droplets to form.

What they saw surprised them.

ICR and other analytical tools are now helping scientists learn more about those surfactants. Does that emulsion wall vary under different conditions, such as pH, for example?

"The goal is to manipulate the chemistry of those walls so we can use it when it's needed and get rid of it when we don't," Rodgers said.

What scientists learn will also have applications in renewable fuels, whether extracted from algae, pine pellets, sugarcane or other biomass.

"All of those materials have an enormous water content," said Rodgers — water that needs to be removed before you can make fuel from it.

Scientists studying fuels are interested in other problematic interfaces, too, such as fine particles like rust in crude oil.

Turns out that when two things abut, it's never straightforward, requiring scientists to sort it all out.

This story was originally part of a series of stories about Science on the Edge. To read the other stories in the series, see Surprise Under the Surface, Safer Lithium Batteries and Border Patrol.