Researcher digs below the coronavirus's membrane in search of another layer of infection-causing proteins.

By now the mugshot of public health enemy #1 – the COVID-19 virus – is branded into our brains: a gray orb covered by an eerie forest of spikes.

But according to Elan Eisenmesser, an associate professor at the University of Colorado Medical School, potentially scarier are the proteins that lie beneath the sea urchin-like exterior of SARS-CoV-2 . That's where the nucleocapsid protein wraps around the virus's genetic material, or RNA.

That structure, says Eisenmesser, may have a deadly dual purpose: to reach out and snag, like a wicked pirate's hook, the proteins of the body it has invaded and exploit them for its own purpose: infection. 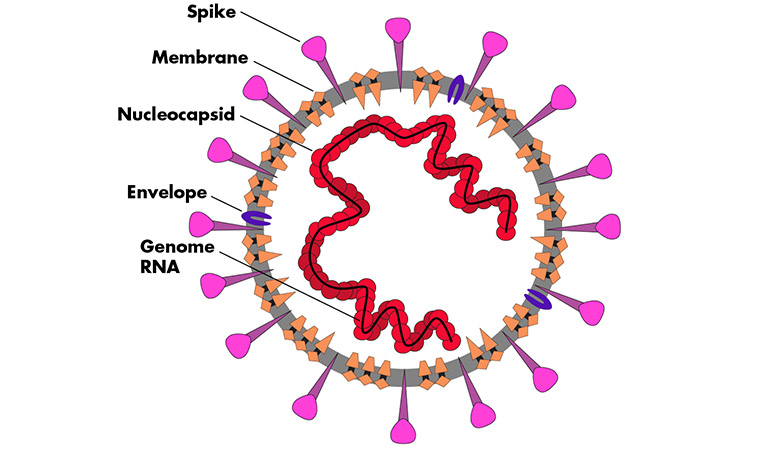 For several months, Eisenmesser has been using powerful nuclear magnetic resonance (NMR) instruments at the National High Magnetic Field Laboratory in Tallahassee, Fla., to investigate this idea. He is comparing the behavior of these proteins to SARS-CoV-1, the virus responsible for the 2002-2003 outbreak. The two cousins resemble each other closely; in fact, their nucleocapsid proteins are 91% identical.

Eisenmesser, who is in the Department of Biochemistry and Molecular Genetics, had studied the SARS-CoV-1 nucleocapsid more than a decade ago. So when the pandemic broke out earlier this year, he was quick to enlist in the fight against this related microscopic foe. His findings, he said, could elucidate possible treatments, research directions and drug targets.

There is strong reason to suspect that the nucleocapsid is doing more than just guarding the viral RNA in its tube-like armor, Eisenmesser says. It's not unusual for proteins to "moonlight" — or take on biological side gigs outside their primary functions. This seems especially likely for nucleocapsid proteins, which far outnumber spike proteins in the SARS virus family.

Another clue to a nefarious secondary purpose is the fact that some regions seem to be able to wiggle about within the structure. That motion may allow them to slither their way into a binding site on an unsuspecting host protein.

"If you think about it, it makes sense, because there's so much of this nucleocapsid surrounding all of the RNA,” says Eisenmesser. "Some of the nucleocapsid could bind one host protein, some could bind another. It could also be cell-type specific, which is something that we're interested in looking at with our colleagues here, who include mass spectrometry experts." Part of the nucleocapsid might target eye cells, for example, while another might latch onto lung cells.

One purpose of this behavior, Eisenmesser suggests, could be to disable the immune cells, cytokines and other defenders that the body dispatches to fight the virus.

"It could tag and stop a protein involved in the normal innate immune response — basically just blocking it from acting as it would," he explains.

The MagLab's high-field instruments allow Eisenmesser to piece together, at the atomic level, the details of host-virus interactions. Like other scientists using the MagLab's facilities during the pandemic, Eisenmesser is conducting his experiments remotely; lab staff, in this case technical/research designer Ashley Blue, assist by running the instruments on site according to his instructions. 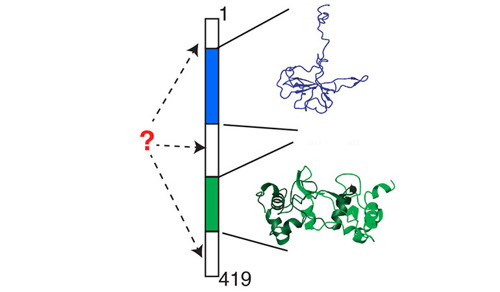 Biophysicist Elan Eisenmesser has been studying the nucleocapsid from the virus that causes COVID-19. The structure is made up of 419 residues, and includes two independently folded domains, one shown here in blue (a small N-terminal domain) and one in green (a dimerization domain), each corresponding to a different segment of residues. Little is known about the movements and the functions of the regions of the structure that are represented in white.

"They're not necessarily flopping around for no reason," he says.

"That's where NMR is so great," Eisenmesser adds, "because it can be used to screen proposed host interactions, using different parts of that nucleocapsid, and thereby identify which part is being used to target the host."

Methodically examining different scenarios may lead to discovering an interaction with a host protein already familiar to pharmaceutical companies.

"Something could be already in the pipeline or already clinically approved," Eisenmesser says. "So you could identify potential blocking reagents that exist already to block the nucleocapsid from targeting particular proteins."

This series focuses on MagLab scientists who are leveraging their expertise and high-field magnets in the fight against COVID-19.

Combatting COVID: Setting the Science Straight on a COVID Protein