Scientists working at the National MagLab have found evidence of a quantum spin liquid in ruthenium trichloride (RuCl3). Read more about this image below.

A new experimental technique allowed physicists to precisely probe the electron spins of an intriguing compound and uncover unexpected behavior.

TALLAHASSEE, Fla. — Using a novel technique, scientists working at the Florida State University-headquartered National High Magnetic Field Laboratory have found evidence for a quantum spin liquid, a state of matter that is promising as a building block for the quantum computers of tomorrow.

Researchers discovered the exciting behavior while studying the electron spins in the compound ruthenium trichloride (RuCl3). Their findings, published today in the journal Nature Physics, show that electron spins interact across the material, effectively lowering the overall energy. This type of behavior — consistent with a quantum spin liquid — was detected in RuCl3 at high temperatures and in high magnetic fields.

Spin liquids, first theorized in 1973, remain something of a mystery. Despite some materials showing promising signs for this state of matter, it is extremely challenging to definitively confirm its existence. However, there is great interest in them because scientists believe they could be used for the design of smarter materials in a variety of applications.

In this brief clip, Kim Modic shows off the special probe and the 35-tesla magnet used for some of the experiments.

This study provides strong support that RuCl3 is a spin liquid, said physicist Kim Modic, a former graduate student at the MagLab's Pulsed Field Facility who is now an assistant professor at the Institute of Science and Technology Austria.

“I think this paper provides a fresh perspective on RuCl3 and demonstrates a new way to look for signatures of spin liquids,” said Modic, the paper’s lead author.

For decades, physicists have extensively studied the charge of an electron, which carries electricity, paving the way for advances in electronics, energy and other areas. But electrons also have a property called spin. Scientists want to also leverage the spin aspect of electrons for technology, but the universal behavior of spins is not yet fully understood.

In simple terms, electrons can be thought of as spinning on an axis, like a top, oriented in some direction. In magnetic materials, these spins align with one another, either in the same or opposite directions. Called magnetic ordering, this behavior can be induced or suppressed by temperature or magnetic field. Once the magnetic order is suppressed, more exotic states of matter could emerge, such as quantum spin liquids.

In the search for a spin liquid, Modic’s research team homed in on RuCl3. Its honeycomb-like structure, featuring a spin at each site, is like a magnetic version of graphene — another hot topic in condensed matter physics.

“Ruthenium is much heavier than carbon, which results in strong interactions among the spins,” said MagLab physicist Arkady Shekhter, a coauthor on the paper. 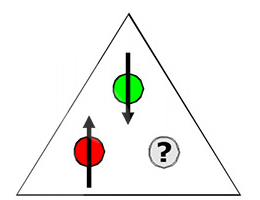 In frustrated systems, two spins pair up, leaving the third in a magnetic limbo.

The team expected those interactions would enhance magnetic frustration in the material. That’s a kind of “three’s company” scenario in which two spins pair up, leaving the third in a magnetic limbo, which thwarts magnetic ordering. That frustration, the team hypothesized, could lead to a spin liquid state. Their data ended up confirming their suspicions.

“It seems like, at low temperatures and under an applied magnetic field, RuCl3 shows signs of the behavior that we’re looking for,” Modic said. “The spins don’t simply orient themselves depending on the alignment of neighboring spins, but rather are dynamic — like swirling water molecules — while maintaining some correlation between them.”

The findings were enabled by a new technique that the team developed called resonant torsion magnetometry, which precisely measures the behavior of electron spins in high magnetic fields and could lead to many other new insights about magnetic materials, Modic said.

“We don’t really have the workhorse techniques or the analytical machinery for studying the excitations of electron spins, like we do for charge systems,” Modic said. “The methods that do exist typically require large sample sizes, which may not be available. Our technique is highly sensitive and works on tiny, delicate samples. This could be a game-changer for this area of research.”

Modic developed the technique as a postdoctoral researcher and rejoined MagLab physicists Shekhter and Ross McDonald, another coauthor on the Nature Physics paper, to measure RuCl3 at high magnetic fields.

Right: The scientists used a novel technique called resonant torsion magnetometry to study RuCl3 in high magnetic fields, high pressure and low temperatures. Their technique involved mounting a 30-micron wide sample of RuCl3 (the bluish area on the right) onto a cantilever the width of a strand of hair.

Their technique involved mounting RuCl3 samples onto a cantilever the size of a strand of hair. They repurposed a quartz tuning fork — similar to that in a quartz crystal watch — to vibrate the cantilever in a magnetic field. Instead of using it to tell time precisely, they measured the frequency of vibration to study the interaction between the spins in RuCl3 and the applied magnetic field. They performed their measurements in two powerful magnets at the National MagLab, which is funded by the National Science Foundation and the State of Florida.

"The beauty of our approach is that it's a relatively simple setup, which allowed us to carry out this technique in both a 35-tesla resistive magnet and a 65-tesla pulsed field magnet," Modic said.

"Our next step will be to study this system in the MagLab's world-record 100-tesla pulsed magnet," added Shekhter. "That high of a magnetic field should allow us to directly observe the suppression of the spin liquid state, which will help us learn even more about this compound's inner workings."

In addition to Modic, Shekhter and McDonald, the other scientists contributing to this paper were: J. P. C. Ruff of Stanford University; Maja D. Bachmann of the Max-Planck-Institute for Chemical Physics of Solids and Stanford University; You Lai of Los Alamos National Laboratory (LANL), Florida State University (FSU) and Cornell University; Johanna C. Palmstrom of Stanford; David Graf of the National MagLab; Mun Chan, F. F. Balakirev and J. B. Betts of LANL; Greg Boebinger of FSU and the National MagLab; Marcus Schmidt and Dmitry Sokolov of the Max Planck; Michael J. Lawler and Brad Ramshaw of Cornell; and Philip J. W. Moll of Max Planck and the Ecole Polytechnique Federal de Lausanne.

The Institute of Science and Technology Austria is an international research institute in Vienna dedicated to cutting-edge research in natural and formal science.

About the illustration: Scientists targeted RuCl3 because of its crystal structure, which resembles that of another promising material, graphene — but with a twist. In RuCl3, ruthenium ions form a simple honeycomb lattice, as do the carbon atoms in graphene. But unlike graphene, RuCl3 also features a network of "linking" ions — chlorine in this case. The twisted octahedra formed by chlorine around the electron spin of each ruthenium atom create a chiral environment: As illustrated here, they are mirror images of each other. This chiral "twist" is key to the compound's unusual behavior.