A piece of the meteorite Gujba.

At research conducted at the MagLab, a young geochemist uncovers the surprisingly violent origins of a meteorite.

A former National MagLab researcher has cracked the code to reveal the deep and interesting history of an ancient meteorite that likely formed at the time our planets were just developing.

Jonathan Oulton conducted his research on pieces of a meteorite called Gujba while still an undergraduate working under National MagLab geochemist Munir Humayun. Using sophisticated lasers and mass spectrometers at the MagLab, Humayun and Oulton conducted in-depth chemical analysis of the meteorite samples that shattered previous theories about when and how this meteorite had formed. 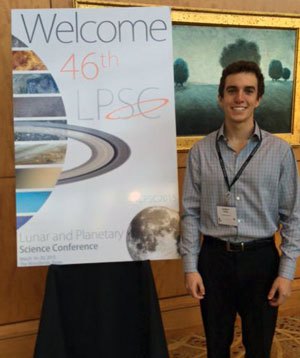 Jonathan Oulton at the Lunar and Planetary Science Conference.

“We tried to elucidate a story about its origins through this science,” said Oulton, a 2015 Florida State University grad who is now pursuing a doctoral degree at University of Colorado.

Previously, scientists believed that Gujba was formed more or less from the dust of the solar system.

But, as Humayun and Oulton analyzed it, they discovered it had a far more complex geological history than previously thought. They inferred that Gujba formed from the debris of a collision between a parent planet that had both a crust and mantle, something that would only be found on a fairly large planet of the kind that is not seen today in the asteroid belt.

To get that type of formation, Gujba would have been involved in more than the equivalent of a solar system fender bender.

Oulton, Humayun and their collaborators argue that Gujba formed from the molten debris produced when a large metallic body smashed into another planet and both bodies were destroyed in the process. Based on chemical traces preserved in Gujba, the target planet might have been even larger than the asteroid 4 Vesta, one of the largest bodies in the asteroid belt with a diameter of about 326 miles or 525 kilometers.

“People used to say that meteorites like Gujba were the building blocks of the solar system,” said Humayun, a professor in the Department of Earth, Ocean & Atmospheric Science professor at FSU. “Now, we know it’s the construction debris of the planets, to borrow a phrase from Ed Scott of the University of Hawaii.”

The research will be published in an upcoming issue of Geochimica et Cosmochimica Acta, but is currently available online.

Oulton presented the preliminary results of the paper at the 2015 Lunar & Planetary Science Conference and received the Dwornik Award of the Geological Society of America for the best undergraduate presentation.

“In a broad sense, people have been trying forever to understand how we got here,” Oulton said. “Although this doesn’t get to that directly, this research gives us a greater understanding of the physical chemistry of everything that occurred at the time the Earth formed.”

Oulton served as the lead author on the article. Other researchers on the paper are Lawrence Grossman and Alexei Fedkin of The University of Chicago.

To read more about Oulton’s experience as an undergraduate researcher, please visit the FSU Research Tumblr.