Paleobiogeochemist (no, that's not a typo) Nur Gueneli put some ancient dirt into our magnets to learn more about the Earth's earliest inhabitants.

When scientist Nur Gueneli came to the MagLab this month, she brought with her the oldest substance ever to find its way into our magnets. By a long shot. 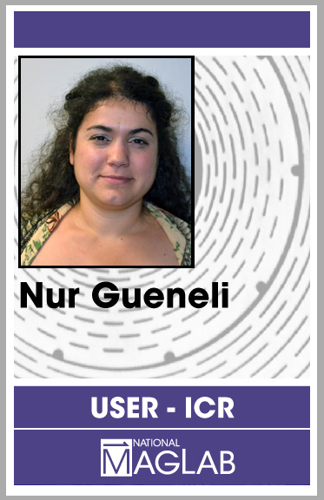 From far-off Australia, where she had just defended her dissertation at the Australian National University (ANU), Gueneli jetted to the MagLab's Ion Cyclotron Resonance Facility. The facility boasts the most powerful instruments of their kind in the world, used routinely to analyze petroleum samples up to 100 million years old.

Those samples are but babes to Gueneli. Her experiment involved ancient organic matter 10 times older than that.

Under Jochen Brock, head of the Paleobiogeochemistry Group at ANU, Gueneli has spent the last few years scrutinizing core samples from an oil field in northwest Africa. In ever greater detail, she has probed the samples for clues about the life and ecology that existed there 1.1 billion years ago, an era called the Mesoproterozoic. Her quick laugh and enthusiasm in tow, Gueneli arrived eager to dig deeper than ever into her intriguing sample.

Gueneli brings a rich background to her work. Born in Germany to Turkish parents, she is fluent in three languages (her nimble English bears traces of her Aussie years) and has two master's degrees, one in biochemistry and molecular biology, the other in geology and paleontology. Excited to share her work, Gueneli presented a talk to MagLab scientists during her visit and sat for an interview (see below) about her research.

Probing our planet's past

About 1.1 billion years ago, the Taoudeni Basin, the area Gueneli's samples are from, was dotted with inland lagoons full of sea water — water teeming with single-cell microbes that were our planet's earliest life. These included photosynthesizing bacteria that played a huge role in Earth's history, producing oxygen that paved the way for higher forms of life.

For her Ph.D. thesis, Gueneli's job was to detect traces of these long-gone microorganisms by looking for biomarkers – substances such as membrane lipids and chloropigments, for example — that are the fingerprints left behind by some organisms. Gueneli not only found those biomarkers, she hit the paleobiogeochemical jackpot: porphyrins.

Porphyrins are biological pigments found, for example, in red blood cells and chlorophyll. A porphyrin molecule can survive (somewhat altered by its environment and geological forces over time) long after the organism it belonged to has perished, leaving a chemical clue as to what that organism was. Using analytical tools at her disposal at ANU, including liquid chromatography and mass spectrometry, Gueneli found evidence that some of the porphyrins in her samples were associated with specific kinds of photosynthesizing bacteria, indicating they had lived in that ecosystem some 1.1 billion years ago. In fact, those biomarkers turned out to be the oldest, definitively-aged porphyrins discovered to date – by 600 million years, according to her group.

"It is just amazing to see something that old. Can you imagine 1.1 billion years ago?" Gueneli gushed. "If you look at that sample … the amount of information you can get out is just amazing." You could even tell, by looking at the elements in those porphyrins, whether oxygen was in the ecoystem when they were deposited, she said.

Gueneli paused for breath, her zeal getting the better of her. "Anyway," she resumed, "that's me being a science nerd."

Despite everything she learned about her sample, Gueneli hit a wall: She knew a lot of information remained hidden in her sample that her tools could not detect. "It's frustrating," she said. "You know it's in there … but you can't go a step further."

So Gueneli began hunting for some person, place or machine to help her dig deeper.

Her quest took her to a tiny New Hampshire town, where she attended a geochemistry conference last year and noticed a talk on the agenda about porphyrins. The speaker was MagLab chemist Amy McKenna, who has studied the unique class of compounds for the better part of a decade. She and other MagLab scientists have developed a method to separate porphyrins out from oil samples, and she was at the conference to talk about it. Gueneli set her sights on the woman she dubbed the "porphyrin lady," but did not connect until McKenna's presentation.

"After I gave my talk — it was already late at night — this woman was – wooosh – just right up with me the minute I got done with my talk, and was wanting to talk about her samples," recalled McKenna, who manages the user program for the ICR Facility.

The two scientists agreed that those samples, and the world-class machines and expertise at the MagLab, were a good fit. Lab staff did some initial analysis of the samples last year, paving the way for Gueneli's recent visit, funded in part through a first-time user grant from the MagLab.

Zooming in on the answer

Being on site for a deeper analysis of her samples was both eye-opening and humbling, Gueneli said.

Working with McKenna and research assistant Logan Krajewski, Gueneli learned how to start the 9.4 tesla passively-shielded ICR magnet used for the experiment, how to inject the sample, and how to pinpoint the porphyrins in the data generated by the machine. The instrument's resolution — 1,000 times better than what was possible with tools Gueneli had previously used – made detection of the substances crystal clear.

"I was like, ‘Oh my God, I can zoom in! And I can zoom further in! And more and more," she said. "Here we are looking at parts of my sample that back home we don't look at because we can't, because the machine simply doesn't detect them."

But Gueneli's goal at the MagLab was to do more than just identify porphyrins. She wanted to see what those molecules actually looked like. "We knew that there's that many carbon atoms, that many hydrogen atoms, and so on," she said. "But I wanted to know how they are connected to each other."

Porphyrins are "a long kind of hairy-looking molecule," said McKenna: Finding out how they are put together is a painstaking process. First, from the tens of thousands of molecules injected into the ICR machine, you must single out the one porphyrin that is your target. "When you're talking about isolating one peak, that's really tough," said McKenna. "You have to let everybody in, and then kick everybody else out. That's what we do."

Then, once you isolate the target molecule, you smash it to pieces with a laser.

"The idea behind it is to make the porphyrins fall into fragments," explained Gueneli. "By detecting the size of these fragments and putting them back together you can reconstruct the structure, which can be very specific for some organisms."

Although she makes it sound simple, it's anything but. Those molecules are spinning inside the ICR machine faster than a race car. Aiming the laser at them at just the right time and place (the technique is called infrared multiphoton dissociation) requires a combination of time, patience, experience and luck.

"I wanted her to be here to see that it's not a run-of-the-mill type experiment, when you're working with such a complex mixture like petroleum," McKenna said. "It's a very difficult experiment."

After several days of work, Gueneli and her support team had successfully smashed enough porphyrins to yield some 40 mass spectra. That's enough to keep Gueneli, her collaborators and her MagLab support team busy for many months of analysis.

An interview with Nur Gueneli

You're a paleobiogeochemist. Did you make that up?

Since I started my degree, we have had several names for the group. I think the most recent one is "paleobiogeochemistry." We've been just "astrobiology," at some point — it's just the more fancy word for the exact same research. Or just "geobiology."

I thought that was a joke. But you guys actually did make that up.

The "paleo" just emphasizes that it's old, and "bio" because we look at the old biology, and "geochemistry" because we do use geochemical analysis to do so. It's a very long and impressive way of describing our field.

Are there many people who do that?

No, especially with the focus of our group, which is the transition from simple to complex life during Earth’s middle age — the Proterozoic. It’s actually only a handful of people, I would say, and they are all connected to each other. Because it’s so old, it’s hard to find samples you can work on. Therefore there are only limited people working on it.

What got you interested in that time period, in those questions?

This actually brings me back to my earliest childhood. Apparently the first profession that I would tell people I'm going to do when I grow up would be, in Turkish, "bilim adamı," which means scientist.

I started my undergraduate degrees in Earth sciences and added, as a separate degree, biochemistry to it. I'm always interested in the "how," in the small scale as well as in the big scale. The big scale would be more the geologies, like: How did the universe form? How the Earth and how did it become habitable for humans? And then in the smaller scale it's: How can a complex life — say, humans — function without a lot of errors? Every second in each cell there are thousands of signaling pathways that are happening. How can I stretch my arm? It seems so implausible. That we can live here, that evolution did take place on Earth and created us, created beings … that was my driving energy, basically.

How does your international background help you as a scientist?

I do travel a lot and I talk to different people with different backgrounds. And you hear something about a method, or just a different angle of looking at things. And when you go back home in the office and sit down and look at your problem, you're like, "Oh, I've heard [about this method], let's try if it's applicable." So it does help. You're more open-minded and you are aware that there may be an answer out there that you're not aware of. And then you just call them or email them and say, "Hey, I have this problem, what do you think about it?"

Could you have conducted your MagLab experiment without the staff's support?

As a first-timer I don't think there would have been any results. You definitely need the manpower with it as well, just because it is so specialized. Amy [McKenna] was saying, "It's similar to flying an airplane." You know in theory a lot of things, but actually doing it, getting the settings right — just a little bit left, just a little bit up — that's experience.

What do you live for as a scientist?

It's definitely not the big money. I think it's just knowledge, doing something that hasn't been discovered before, made before. My research is not applied, but it's pretty cool to say, "Hey, the Earth looked back then like this." It's for the sake of knowledge. I just like to fill in the gaps, bring some light into some darkness. 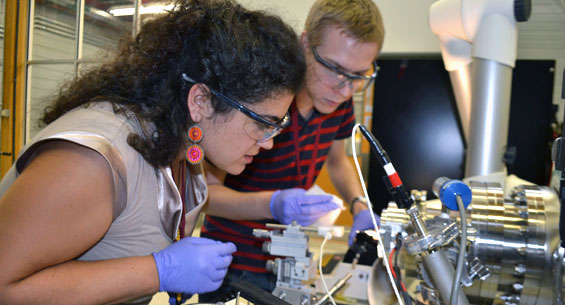 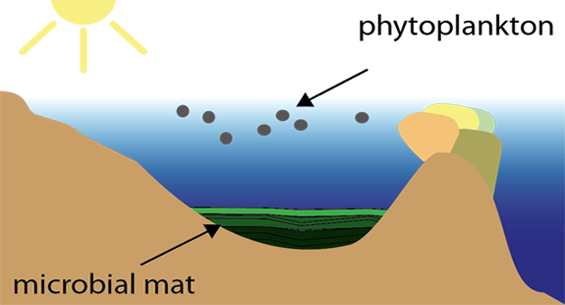 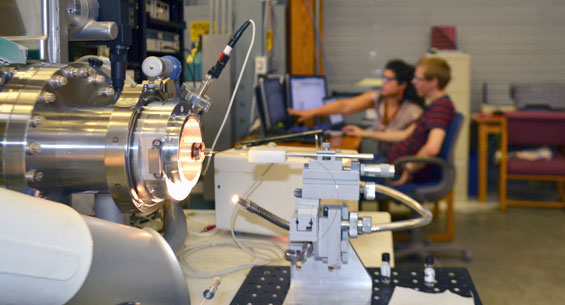 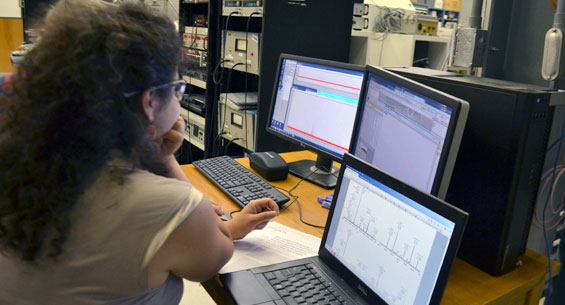 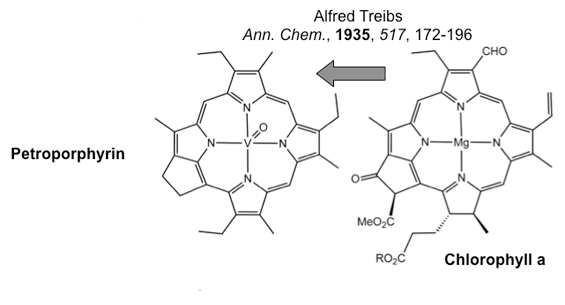 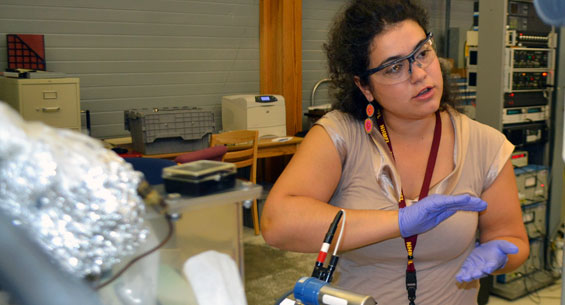 Story and Photos by Kristen Coyne

After finishing the analysis of her MagLab data, Gueneli and her colleagues published their results in 2018. Their findings made a big stir in the international media. Read more.

Want to use a magnet?

More than 1,400 scientists come from across the world to use our unique magnets. If you have an experiment you would like to do here, find out how to request magnet time. Magnet time is free.