Chromatography, literally "color writing," was first used by Russian botanist Mikhail Tswett, who used columns of calcium carbonate to separate plant pigments such as cholorphyll and carotenoids in 1901.

Later, a Nobel Prize was awarded to Archer John Porter Martinand Richard Laurence Millington Synge for "invention of partition chromatography" in 1952. Efforts during the past several decades have focused on the chromatography instrumentation, such as pumps, autosamplers, and detectors, as well as on the development of columns for faster separation and better resolution. Liquid chromatography is one of the most important techniques for the separation of complex mixtures.

Liquid chromatography separates a sample into its individual component in the following steps. A small volume of liquid sample is injected and loaded onto a tube packed with porous particles (stationary phase). The components of the sample are transported along the packed tube (column) with a liquid (mobile phase) moved by gravity or high pressure. The sample constituents are separated based on their different affinity for the mobile or stationary phase. On eluting from the column, the detected component signal vs. time constitutes a "liquid chromatogram" (See Figure 1).

Figure 1. Example of a liquid chromatogram. Components 1, 2 and 3 elute at different retention time depending on their affinity for the stationary phase.

Liquid chromatography separation is based on affinity of the analyte for both the stationary phase and mobile phase. Silica is one of the most popular adsorbent materials for liquid chromatography. Silica particle sizes generally range between 3 and 50 microns, and the particle pore size ranges between 100-1000 Angstrom. The porous silica particles in the column usually have a chemically bonded phase (hydrophobic alkyl chains) on their surface that interacts with the components through chemical bonding (Figure 2). The three common chain lengths are C4, C8 and C18. C4 is mostly used for proteins whereas C8 and C18 are used for peptides or small molecules. Proper selection of mobile phase is also crucial for a successful separation. The main requirement for the mobile phase is that it dissolves the components up to the concentration suitable for the detection. The type of mobile phase may have a great effect on the retention time in separation as well as the ionization of the components in downstream detection. The pH of the mobile phase can have an important role on the retention of a component and can affect the selectivity.

Depending on the choice of stationary and mobile phase, four major separation modes are used to separate most compounds. 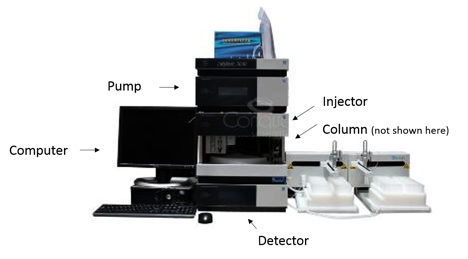 This technique can be used with the following instruments:

What's happening at the MagLab tody?

Explore our magnet schedule to see what exciting research is happening on our stellar fleet of instruments right now.

Find the Perfect Magnet
for your Research

Search our magnets by field strength, bore size, and even technique.