A new record for a trapped field in a superconductor could herald the arrival of materials in a broad range of fields.

TALLAHASSEE, Fla. – A team of University of Cambridge researchers, with the help of MagLab collaborators, have achieved a new world record for high-temperature superconductors. The team's experiments, which began at the National High Magnetic Field Laboratory three years ago, represent a significant breakthrough in the fabrication of high-temperature superconductors.

The team was able to sustain, or 'trap,' a 17.6 tesla magnetic field in a thumb-sized bar of material made of gadolinium barium copper oxide (GdBCO). That achievement beat, by 0.4 tesla, a previous record in place for more than a decade. The results have been published in the June 27 issue of the journal Superconductor Science and Technology. 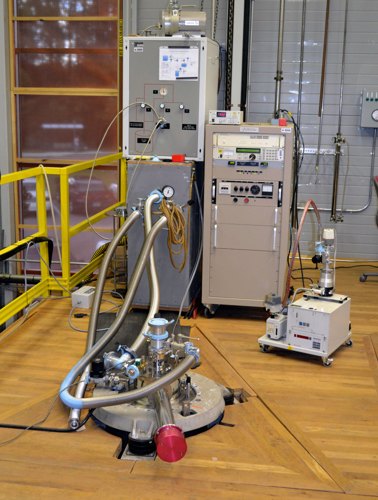 The research was done in the DC Field Facility's SCM2 magnet (pictured above) and the 31 tesla magnet in cell 7.

"The fact that this record has stood for so long shows just how demanding this field really is," said Professor David Cardwell of Cambridge's Department of Engineering, who led the research, in collaboration with Boeing and the MagLab at Florida State University. "There are real potential gains to be had with even small increases in field."

Physicist Jan Jaroszynski, who ran many of the experiments at the MagLab, was on hand when the GdBCO superconducting material reached the record-breaking 17.6 tesla.

The research demonstrates the potential of high-temperature superconductors for applications in a range of fields, including building more powerful MRI (magnetic resonance imaging) machines for use in hospitals, high-speed levitating monorail trains, flywheels for energy storage, and 'magnetic separators,' which are used in mineral refinement and pollution control.

Superconductors are materials that carry electrical current with little or no resistance when cooled below a certain temperature. While conventional superconductors need to be cooled close to absolute zero (zero degrees on the Kelvin scale, or -273 °C) before they superconduct, high temperature superconductors do so above the boiling point of liquid nitrogen (-196 °C), which makes them easier to cool and cheaper to operate.

Superconductors are currently used in scientific and medical applications, such as MRI scanners. In the future, they could be used to protect the national power grid and increase energy efficiency, due to the amount of electrical current they can carry without losing energy.

Current also generates a magnetic field, and the more field strength contained within the superconductor, the more current it can carry. Practical, state-of-the-art, superconductors can carry currents that are typically 100 times greater than copper, which gives them considerable performance advantages over conventional conductors and permanent magnets.

The new record was achieved using 25 mm diameter samples of GdBCO high-temperature superconductor fabricated into a large, single grain using an established melt processing method. The previous record of 17.2 tesla, set in 2003 by a team led by Professor Masato Murakami from the Shibaura Institute of Technology in Japan, used a highly specialized type of superconductor of a similar, but subtly different, composition and structure.

To contain such a large field, the Cambridge team used materials known as cuprates – thin sheets of copper and oxygen separated by more complex types of atoms. The cuprates were the earliest high-temperature superconductors to be discovered, and have the potential to be used widely in scientific and medical applications.

While the cuprates are high quality superconductors with outstanding potential for practical applications, they can also be as brittle as dried pasta. Trapping a strong magnetic field within bulk forms of the cuprates can cause them to explode.

In order to hold in the magnetic field, the researchers had to modify the microstructure of GdBCO to increase its current carrying and thermal performance. They also reinforced it with a stainless steel ring, which was used to "shrink-wrap" the single grain samples. "This was an important step in achieving this result," said John Durrell, who led the experiment in Florida.

The lines of magnetic flux in a superconductor strongly repel each other, making containing such a large field difficult. But by engineering the bulk microstructure, the field is retained in the sample by so-called "flux pinning centers" distributed throughout the material. "The development of effective pinning sites in GdBCO has been key to this success," said Yun-Hua Shi, who has been responsible for developing the melt-process fabrication technique at Cambridge for the past 20 years.

The result was the biggest trapped field ever achieved in a bulk, stand-alone material at any temperature.

The Cambridge team and its collaborators are currently developing a number of niche applications, and widespread commercial applications for superconductors could be seen within the next five years.

"This record could not have been achieved without the support of our academic and industrial colleagues and partners," said Cardwell, who is the next Head of the Department of Engineering. "It was a real team effort, and one which we hope will bring these materials a significant step closer to practical applications."

"Boeing continues to see practical applications for this superconducting material research," said Patrick Stokes, who leads the Boeing funded research portfolio with Cambridge University. "We are excited about the possibilities being enabled by the recent advances achieved by the Cambridge team."

Adapted from the original news release by the University of Cambridge.