This iron-packed substance has a dual personality; one second it's a liquid, the next it's a solid. Mix up a batch at home and see how this unique stuff works.

A ferrofluid is a special liquid with tiny magnetic particles floating around inside. Since these particles are attracted to each other, they must be coated with a special substance that prevents them from sticking together (so that the ferrofluid remains fluid). What makes ferrofluid so special is that in the presence of an outside magnetic field, each of the tiny particles becomes magnetized and the ferrofluid condenses into a solid.

In this activity you will be able to make and play with your own ferrofluid and see how it behaves in the presence of a magnetic field.

The pattern that a ferrofluid makes depends on the amount of fluid used, the shape of the container it's in and the strength of the magnetic field used. The movies below were made at the MagLab; the ferrofluid is inside a superconducting magnet with a maximum field about 100,000 times stronger than the Earth’s magnetic field. The movies show a ferrofluid in two different situations:

The ferrofluid is in a plastic dish with a slightly convex bottom, so the ferrofluid moves towards the outer edge. As the movie plays, the magnetic field is getting stronger, and the fluid coalesces into smaller and smaller cone-like structures (which you see from the top down).

The ferrofluid is in a concave dish called a watch glass. The magnetic field is increasing as the movie plays, but is not as strong as in the first movie. As the field gets stronger the fluid, again, forms into smaller and smaller cones, though it's hard to tell them apart toward the end of the movie because of the amount of fluid in the bottom of the watch glass.

What's another word for magnetized?

Answer - Polarized! It's a reference to the north and south poles of the magnet. “Ionize” means to turn an atom into an ion by adding or removing an electron. “Ferrofied” isn’t actually a word – but it sounds pretty cool, doesn’t it?. 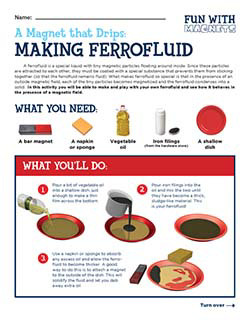