What do you get when you mix a battery, a bit of copper wire and a nail? One of the most important forces in science. Try it yourself and let the force be with you!

Electromagnets are different than the permanent magnets used in the other Try This at Home activities. They’re not magnetized metal: they’re basically a wire conducting electric current, which in turn generates a magnetic field. Magnetism and electricity are very closely related phenomena.

Electromagnets have a wide range of uses, from the MRI machines used in hospitals to remote-control toy cars to many appliances in your home. They vary in strength from very weak but sensitive electromagnets used to detect other magnets or electric currents to the huge research instruments used here at the Magnet Lab.

What happened, and why!

In step 1, when you tested the nail to see if it was a magnet, you realized it was not because it did not attract the metal in the paper clip. However, iron nails can be magnetized. Your compass did not react to the wire because the wire by itself emitted no magnetic field.

In step 2, when you placed the compass under the wire, the needle deflected because the wire was now carrying an electric current generated by the battery, and current-carrying wires have a magnetic field around them.

Which of the following household items does not use an electromagnet?

Answer - None of the above! OK, so we tricked you. The fact is, it’s hard to find an appliance that doesn’t have a magnet in it. Besides their obvious uses in can openers, magnets are a critical ingredient in the electric motors that make most appliances tick. Check out the below link to see how electric motors work. 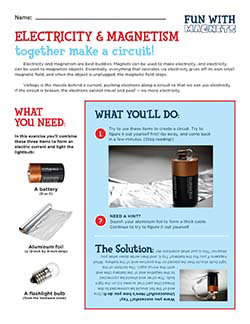